"What is this I'm feeling? What's this surge of emotion going through me?"

Captain of the Claudio Soldiers

Zina Luikvälja (ジナ・ルイクバハ, Jina Ruikubaha?) is the playable character in Final Fantasy Golden Stories, Captain of Claudio Army and older twin of Fiona Luikvälja. She is the fearless, overprotective warrior who assigned to protect Princess Laura. She and Fiona lost their older brothers by Schneider's hands, leaded to her to get revenge. At the end of the war, they reunited with their brothers, who're comes back to life once again.

Zina is the strong-willed young woman with her power to be reckoned and wield an Axe as her favorite weapon. During her quest alongside the party, she fall in love to an handsome Elflimian soldier named Lowil Easthart and made her change of her heart, despite she fighting him.

Zina's special skillset is SwordArt, which allows her to wield her weapon to various offensive effects, dealing damage to or weakening enemies. Her Overdrive is Embrace End, which pays the tribute to Rutee Katrea, the character from Tales of Destiny. 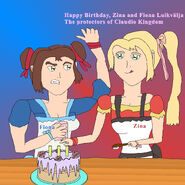 Zina and Fiona's Birthday Card
Add a photo to this gallery

Retrieved from "https://littlelulu-project-studio-fanon.fandom.com/wiki/Zina_Luikv%C3%A4lja?oldid=10905"
Community content is available under CC-BY-SA unless otherwise noted.