"This war just got a bit more interesting. Now, to win the war, we have a new objective. We must find all six of those treasures and we'll make....a wish....of....conquest."

Schneider Hamelin Claudio X (シュナイダー・ハーメルン・クラウディオ10世, Shunaidā Hāmerun Kuraudio Jūsei?) is the primary main antagonist in Final Fantasy Golden Stories, former prince of Claudio Kingdom and current king of Hell's Gorge (later Helgroge Kingdom. He is an older son of King Medgar and Queen Milenia and brother of Princess Laura. After he killed Zina and Fiona's brothers, Laura cuts his long hair to turned his blond hair color to black and banishes him from the kingdom. He also killed Leo's brother in order to change his destiny and, joined by his wife Sareena and the human outsiders, begin to plotted to take over Claudio Kingdom and Krajina.

After losing his dark power to Kayes, his evil form changed to good person and reunited with Laura, leading to take revenge on Lazzaro, Kayes' brother, for brainwashing him.

As the playable characters, he has unique Dark Knight's skillset called Arcana, which allowed to performs special skills based on dark power, and Black Magic to cast the damage-basic magic.

Schneider's evil side that serves as the boss battler 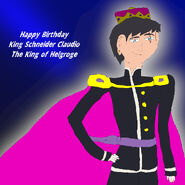 Schneider's Birthday Card
Add a photo to this gallery

Retrieved from "https://littlelulu-project-studio-fanon.fandom.com/wiki/Schneider_Hamelin_Claudio_X?oldid=10785"
Community content is available under CC-BY-SA unless otherwise noted.