Today is a special day when the famed Japanese player, Captain Tsubasa Ozora inviting Hamon FC for the Dream Match against Asgard Giganto FK. Miyuki and the Hamon FC leaves Goseigahara to spend a holiday at Norway. There, they meets Ryoma's favorite player and idol, Tsubasa, and together, they have a friendly match with the Norwegian team club Asgard Giganto FK. However, the Asgard Giganto's captain spoils the game and threaten them to turn this place into alternate dimensional world. Ryoma and Tsubasa works together to defeats this team until discovered that Asgard Giganto FK turns out to be cursed by the man we never know. In the other word, the Norse oracle Odin uncovers the Galaxy Cup that hold a sacred power in which gathering enough energy known as "Bravenergy" to reverse the Mokushenergy. To the horror, the captain was possessed by the sea serpent named Jormungandr, who desired to destroy the universe by using Galaxy Cup to absorb the Mokushenergy.

Mark of Miyuki's word with Tsubasa is: We'll do our best! Ball is my love, and friendship!. It's up to the AceStriker to save the universe from evil's ambitions!

Note: The story, characters and powers are based on Dragon Ball Z Movie: Broly – The Legendary Super Saiyan.

On Cosmo Dome, Hawk and Gear senses the destruction of Nordic countries by an unknown Scandinavian man. Odin and his wife Frigg connecting with Hawk via mirror and say that Sweden had partly destroying by the giant sea serpent. Gear quickly contacts Miyuki upon realizing the that Kingdom of Norway will be targeted next. At that moment, Miyuki, the Hamon FC and Seien Gamma teams are traveling to Oslo to having an interview with Ryoma's favorite idol Tsubasa Ozora at a private stadium which they hope Asgard Giganto FK will facing Dream Team, Victor uses Glorious Teleport to reach Hawk's headquarter to get the entire story.

Back on Norway, the players are going on picnic in Nordstjernen Park with Tsubasa Ozora when Thorvald Asheim, legendary striker and the Asgard Giganto FK team, greet Miyuki as the captain. The trickster Scandinavian god, Loki, who claims that he has created a new Asgard Realm and wishes for Odin to accompany him in order to live as the afterlife home. Odin initially refuses, but agrees after Loki tells him that a being known as the "Legendary Sea Serpent" is running rampant throughout the galaxy and must be destroyed before he comes to Norway. Skeptical of Loki's story, the AceStrikers, Tsubasa, Suika, Masao, Naoto and Thorvald go along with Odin and Frigg.

Tsubasa forms three teams into Hamon Dream team to challenge Asgard Giganto FK for the Galaxy Cup friendly match while the COSMO Monoceros idol unit paying the tribute for him by singing the theme song called Moete Hero. After match, Miyuki goes with Ryoma, Rinsho, Odin and Frigg to see what Loki want.

On Asgard, Odin meets Loki's middle son, Jormungandr, and the two leave together to hunt down the Legendary Sea Serpent. Ryoma, Itaru and Kakeru meet the planet's slaves and defend them from their abusive masters. During the struggle, Miyuki, Rinsho and Victor arrives via Glorious Teleport, having followed their energy signals after Frigg's story. The slaves tell them that the serpent destroyed Old Asgard, and they were found by Loki, who made them into his slaves. That night, Loki and Jormungandr return, having had no luck. While Odin receives Ryoma coldly, Jormungandr appears agitated at the mere sight of them as Loki calms his son down by raising his hand as a light shines on his staff. But Jormungandr summons his Haisha sister Hel later to attack Miyuki in the middle of the night with the AceStrikers evenly defeats Hel before Loki appears and calms Jormungandr down again. After the fight, Victor suspects that Jormungandr is the Legendary Sea Serpent in Norse mythology due to Miyuki's similar power and also begins to doubt Loki's claims. Loki, for his part, has been controlling his children: Fenrir, Jormungandr and Hel with a mind control staff, which he suspects may be malfunctioning. Loki then realizes that that Jormungandr is responding to the AceStrikers: Revealed that his sister, Hel, was defeated by the AceStrikers' predecessor and Jormungandr unable to see her death with her last words before turned into Haisha Crest, used as revenge against AceStrikers.

Odin soon loses patience with Loki and decides to return to Earth with the others, as Miyuki and the others confront Loki upon learning about hidden agenda of Jormungandr which the slaves even confirmed to be one who destroyed Asgard. As the Hamon Dream and Asgard Giganto FK teams resumes their match, Thorvald losing control on himself by Jormungandr's possession and being attempt to steal the Galaxy Cup so he can destroy the universe. But Tsubasa knocks him out with Driver Shoot, allowing Miyuki to purifying Thorvald. But unfortunately, Jormungandr's rage over his possessing attempted failure swells up to the point of breaking free of the mind control device as he absorbs the Galaxy Cup's Mokushenergy to transforms into armored form: Armored Serpent Jormungandr.

Jormungandr proceeds to attack the AceStrikers while Odin lost his will to help them at the sight of the sea serpent. Loki taunts Odin for being naïve while revealing that Jormungandr was an elite commander of Apocalypse army, feared by Lord Azazel to the point of ordering the death sentence for betrayal. Loki pleaded for his son and was severely wounded and left for dead, Jormungandr's power manifesting to blast them off of Asgard as it was destroyed by Apocalypse Horseman. But Jormungandr's exposure grief over Hel's death, followed by his attempted execution and survival the Asgardian eradication, rendered him severely unstable as he got the human form. Loki was forced to use a mind control staff to pacify his son after being lost his left hand, intending to have his revenge on Odin's bloodline and convert Earth into new Asgard Realm to rule the entire universe from. Furthermore, the Apocalypse's elite team, Super Dimensional Eleventh Corps, is approaching Asgard Realm, and will help Jormungandr destroy it upon impact.

Jormungandr makes a quick work of Miyuki to kill her instantly, the AceStrikers arrives with Galaxy Cup and is also beaten, but summons enough will power known as Bravenergy to forcibly Odin and Frigg to brings Ryoma and Rinsho to the battlefield. Seeing Jormungandr pummel his friends repeatedly eventually gives Ryoma and Rinsho enough incentive to join the fight to avenged Miyuki's death, but they also proves to be no match for Jormungandr. Loki tries to escape from Asgard Realm by himself, only for his cockpit to get crushed by Jormungandr and flung into the comet. When Jormungandr is about to destroy the universe, Ryoma holds a lifeless Miyuki and Victor call out Tsubasa to give them the power via Bravery*Cosmo Love Amulet so Miyuki can defeating Jormungandr in full force. Tsubasa and his teammates grants the Bravenergy upon the Galaxy Cup and the Bravery*Cosmo Love Amulet before Miyuki and Ryoma fused together via true kiss, revealed that he fell in love for her and never leave her ever again. Thanks to everyone's encouragement, they morphing into the most powerful gladiator: BraveStriker. With an enormous power, BraveStriker managed to purifying Jormungandr with the most powerful attack: Brave Enkouhouken.

Soon after Super Dimensional Eleventh Corps were purified by BraveStriker, Jormungandr reveals his true form as the Legendary Sea Serpent and being absorbs all the corps and enlarge himself into the massive monster before headed to the Earth. However, despite Jormungandr's true power, the AceStrikers summons Super Electron Saints to prevent him from destroying the Earth. Even though Jormungandr will never let it chance to stop him, BraveStriker and the AceStrikers refuse to give up, and takes every blow Jormungandr lands on them, even with Tsubasa and his friends offering the robots their remaining power. After much reluctance, Odin and Frigg finally awaken the BraveryLion Crest from Miyuki's courageous emotion, which gives all robots enough power to combines with BraveryLion into the most strongest robot: YuushaStrikerOh to resist Jormungandr's Mokushenergy. As the fatal battle was continue, they finally performs the Striker Braveheart Punch on his heart in exactly the same place where his sister Hel was killed by AceStriker's predecessor, causing Jormungandr's body to crack wide open and apparently explode.

Just as Asgard and Earth are now safe, the AceStrikers take the slaves back to Asgard Odin and Frigg used to follow Miyuki. After Odin and Frigg thanks everyone for saving a day, Miyuki and the others teleport straight to the garden, where they are confronted by an angry Suika, who is annoyed with them for leaving during Tsubasa's award ceremony. Kakeru then comically recites what Miyuki told her to say for Tsubasa's interview, causing Suika and the others to faint. Miyuki return the Galaxy Cup to Thorvald, who's actually turns out to be Thor's descendant. After bid farewell to Asgard Giganto FK, Tsubasa asks Ryoma about how much he loves Miyuki like he was in love for Sanae. Ryoma replied that he still known how much she loves him when they were children. In the end, the AceStrikers suggested that they're keep her safety with them and Ryoma thanks them for letting know about his feeling. Ryoma vows to become the champion and smiles at the sky to see Miyuki dancing and cheering over the galaxy. 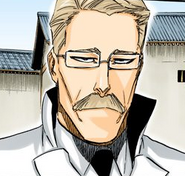 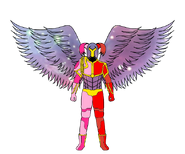 BraveStriker, the powerful-fused form born from love of Ryoma and Miyuki.
Add a photo to this gallery

All pictures were taken from several anime and video games. Absolutely I do NOT own anime or video games, they're belongs to rightful owners!

Retrieved from "https://littlelulu-project-studio-fanon.fandom.com/wiki/Gladiator_of_Field_AceStriker_x_Captain_Tsubasa_the_Movie:_Galaxy_Strike!_Super_Dimensional_Eleventh_Corps?oldid=7890"
Community content is available under CC-BY-SA unless otherwise noted.